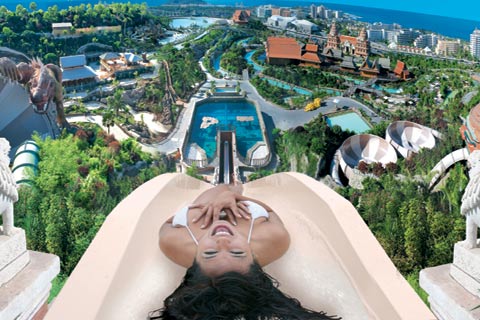 Below we introduce the key attractions to visit in Tenerife with visitor information and also places to visit nearby.

Tenerife has some of the top water parks and attractions in the world and also some of the best festivals. Add to this the chance to go dolphin and whale watching and you can see why visitors from all over the world choose Tenerife.

Jungle Park is a zoo on the southern coast of Tenerife. Its animals include rare white tigers and lions and there are various activities at the park too. [...]

Loro Park is one of Europe's best zoos and also has killer whale and dolphin shows. Enter the 18 meter long shark tunnel. [...]

Siam Park is a huge water park with a Thai theme and has consistently been voted the number one water park in the World. [...]

Tenerife has some excellent festivals some of which are amongst the most popular in the world. [...]